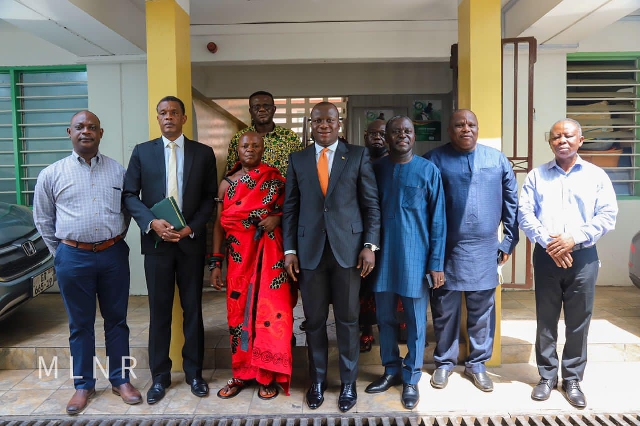 The National Association of Local Authorities (NALAG) in collaboration with its partner, the Federation of Canadian municipalities (FCM), and stakeholders at the just ended International Women’s Day are demanding from government to as a matter of urgency to reconstitute the Appiatse Reconstruction Committee. The Appiatse Reconstruction Committee, according to NALAG, is gender biased.

The Association together with the participants present at the occasion were left in a state of confusion and shock as to why at the time when member countries are striving to achieve gender parity in all spheres of life as stipulated in the Sustainable Development Goals (SDG) 5, the President of the Republic of Ghana, who is the Co-Chair of the SDG Advocates would constitute such a sensitive committee without a woman.

According to NALAG and its partners, forming a gender-balanced committee is key to rebuilding the Appiatse community. For us, women are resource managers and it is important that the government makes it a priority to integrate them fully into any development process.

Ghana has women capable of being part of this important committee, ADD THEM!

“In this day and age, any room full of men only and tasked to take decisions to affect whole communities reflects ignorance and unsophistication and a perpetuation of historical gender-biased decision making processes” – Francisca Serwa Boateng Esq.

The group even though acknowledged the government for the appointment of Dr. Joyce Ayeh as the chairperson for the Appiatse Support Fund but added that Dr. Ayeh would not be part of the decision-making processes to reconstruct the Appiatse community.

We ask why the delay in passing the affirmative action bill?

This is a campaign promise and must be fulfilled to its fullest, the participants demanded.

The National Association of Local Authorities of Ghana (NALAG) in collaboration with the Federation of Canadian Municipalities (FCM) with the support of the Canadian Government through the Global Affairs Canada  joined the rest of the world to mark the 2022 International Women’s Day (IWD) in Accra with a workshop which was attended by stakeholders from the Ministries of Gender, Children and Social Protection, Local Government and Rural Development, Local Government Service, Universities, political parties, NGOs, CSO,FBO, elected and appointed female Assembly Members, administrators, MMDAs, MMDCEs, Traditional Authorities, the Police Service and the media. The theme for this year’s celebration is ‘Gender Equality Today for a Sustainable Tomorrow’ and Breaking the Bias’ as the campaign theme.

The purpose of the IWD 2022 is to celebrate the remarkable achievements of Ghanaian women and to highlight the inherent challenges and strategize to break the socio-cultural biases that limit their participation in all aspects of social life and to make the world a better place for all based on the principle of equal opportunity, social inclusion, diversity, mutual coexistence, accountability and sustainable development.

NALAG is partnering FCM on the PMI-WILL project to support activities of five local governments in five regions. The aim is that by the end of PMI-WILL project, these supported local governments will be modeling an inclusive and gender-responsive approach to governance and community engagement and will be delivering improved municipal services in ways that are more responsive to the needs of women and marginalized groups.