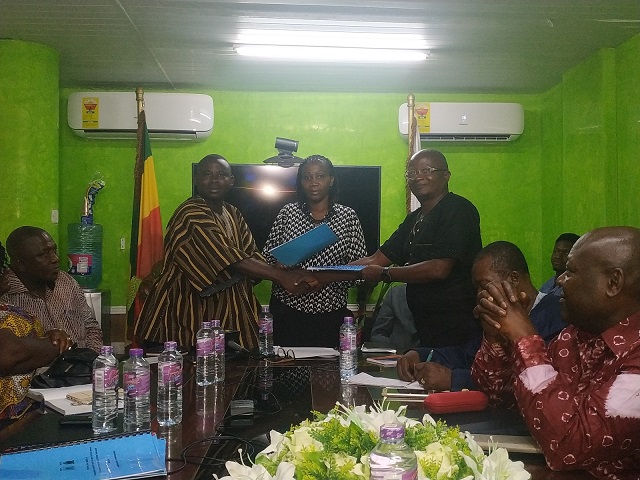 The National Association of Local Authorities of Ghana (NALAG) and Local Council Association of Sierra Leone on Friday, 31st May, 2019 have signed a Memorandum of Understanding (MoU) towards developing and strengthening institutional cooperation to exploit the wide range of activities and joint opportunities between them for the wellbeing of their constituents.

Hon. Kokro Amankwah, the General Secretary of NALAG, signed for NALAG, while LoCASL’s Secretary General, Sahr Moigua, signed for his side.

The agreement was signed at the NALAG House under the chairmanship of Madam Juliet Sale, The Regional Director, West Africa Regional Office of the United Cities of Local Government – Africa (UCLG-A)

Describing the exercise as a ‘crucial one’, the Regional Director, UCLG-A (WARO), Juliet Sale, said the gesture would not only create favourable opportunities for the two countries but also help promote long-term cooperation in advancing good local government practices among the two organizations and their constituents. She also underscored the fact that development partners like the UNDP, and CLGF have been instrumental in providing support for the Associations.

Hon. Kokro Amankwah, for his part, welcomed a NALAG – LoCASL partnership, citing the relationship between the two organizations in earlier times as a significant step to further deepen their advocacy and lobbying as well as their training and capacity building ties.

The MoU among other things seeks to create a network for advocacy and lobbying for improved Local Government administration and decentralization in both countries, experience sharing, training and experiential capacity building for members, research and consultancy services and a platform for sharing of resources (including information and knowledge) relevant to the advancement of Local Governance in both countries as a platform to attaining high scores in the implementation of the Sustainable Development Goals (SDGs).