MMDCEs IN UPPER EAST PLEDGE TO WHIP UP INTEREST IN REFERENDUM 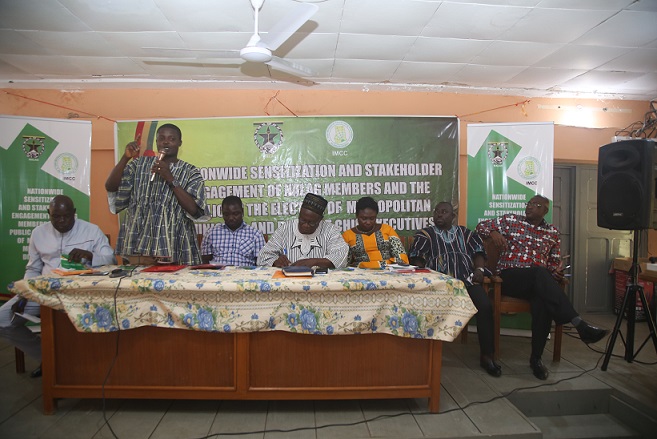 Some Municipal and District Chief Executives (MDCEs) in the Upper East Region have pledged to support efforts at whipping up public interest to vote “YES” in the December 17 referendum to amend Article 55 (3) of the 1992 Constitution.

According to them, an amendment to the entrenched provision had many benefits and was also the first step towards giving power to the people at the grass roots in the region.

The MDCEs made the pledge during a day’s sensitisation and stakeholder engagement seminar for members of the National Association of Local Authorities of Ghana (NALAG), which includes Metropolitan, Municipal and District Chief Executives (MMDCEs) and assembly members, on the election of MMDCEs in Bolgatanga last Tuesday.

The Municipal Chief Executive of the Kassena Nankana Municipality, Mr Williams Aduum, advised other MMDCEs to support the entire process because it would help bring on board quality assembly members for the accelerated development of the districts.

“This exercise is better for us because this winner-takes-all process should be avoided, in fact it is not helping us,” Mr Aduum further stressed.

The Bongo District Chief Executive, Mr Peter Ayinbisa, stated: “let us give power to the people so that we as assembly members and DCEs can be more accountable to the people.”

Mr Ayinbisa was also of the opinion that at the end of the day, MDCEs would be compelled to sit in their offices and work more to meet the aspirations of the people, with the development of their areas becoming a top priority for the elected assembly members.

The President of NALAG, Mr Bismark Baisie Nkum, stated that “devolution of the decentralisation process is the way to go now because when the people have the power, they are the best people to decide on what is good for them and who can represent them, hence the government has little to do with what works for them.”

“All the developed countries have adopted the system we are now trying to implement. In Africa, I can mention countries such as Sierra Leone, Uganda and Burkina Faso who are all implementing this new system of electing their mayors and assembly members at the grass roots, meanwhile most of these countries came to learn how we implemented our decentralisation system,” the NALAG president further observed.

He, therefore, called on all stakeholders to help educate the public to achieve the required 40 per cent registered voters to turn out and at least 75 per cent of those voting in favour of the referendum.