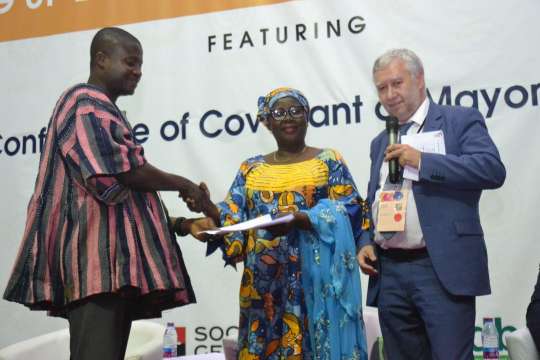 Representatives of the African local and regional governments and non-state actors presented a declaration to the Minister of Local Government, Hajia Alima Mahama towards the fight against climate change for onward presentation at the upcoming United Nations climate talks in Santiago, Chile in December 2019.

The declaration presented by Mr Bismark Baisie Nkum, President of the National Association of Local Authorities of Ghana (NALAG) to the Minister, said, local government representative subscribed to the United Nations’ Secretary General’s alert on climate emergency and call on all stakeholders to act in order to avoid worsening the situation of global warming and to address the challenges brought about by climate change.

They however called for attention to the fact that African priorities on climate actions focused on adaptation to climate change and access to energy, and that mitigation actions would be addressed through the solutions proposed.

The declaration was made at the second African climate chance summit, organized from 16 to 18 October 2019 under the patronage of Nana Addo Dankwa Akufo-Addo, President of the Republic, and in the presence of former President John Agyekum Kufuor former President of Ghana.

“We recommend therefore a balance in funding between climate actions addressing mitigation and adaptation and we further recommend that the recourse to clean energy sources such as solar and wind energy be prioritized when defining strategies to bridge the energy gap in Africa. We propose the involvement of local and regional governments in the implementation of this strategy.

They also requested that a local and regional readiness programme be established, funded and implemented using the national associations of local and regional governments and their continental umbrella organization, the United Cities and Local Governments of Africa (UCLG Africa) in order to contribute to building the capacity of African cities and sub national governments and non-state actors to be able to prepare and submit eligible projects to the climate finance institutions.

“We support the proposal by UCLG Africa Climate Task Force to initiate a bottom-up approach to the revision process of the Nationally Determined Contributions (NDCs) starting with the elaboration of locally determined contributions (LDCs) feeding into the NDCs.

“This approach should be disseminated through the national associations of local and regional governments and UCLG Africa, in order to accelerate ownership of the climate agenda by all relevant stakeholders, and ensure alignment of climate actions at all levels of government, while at the same time addressing coordination and coherence within the framework defined by the Katowice Rule book.  “We humbly request that the government of Ghana champions this approach at the upcoming UN COP 25 and Glasgow COP 26.”

“We strongly encourage African local governments to join the Covenant of Mayors in Sub-Saharan Africa, as the only movement driven by the local governments, by implementing effective actions on energy access, adaptation and mitigation and by setting ambitious targets through their local climate action plans.

“We support the annual African Climate Chance summit “as pre-COP” of the non-state actors and local governments to formulate and deliver their messages at the international level, this dialogue will be called “Accra Climate Dialogue.

“We call on national governments, the African Union through the Committee of African Heads of State on Climate Change (CAHOSCC), and the international community, in particular the institutions within the global climate ecosystem, to support the Accra Climate Dialogue.”